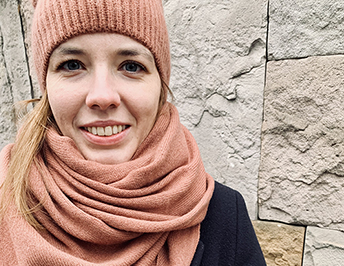 An art historian, coordinator of artistic, publishing and exhibition projects. Curator of exhibitions, managing editor at the National Institute of Architecture and Town Planning (NIAiU). She is interested in the interaction between architecture and visual arts, and is one of the initiators of the ‘Save Mosaics’ project and a co-creator of the NIAiU’s architecture photography collection. She has co-edited the publication Tożsamość. 100 lat polskiej architektury (together with Bolesław Stelmach, published by NIAiU, 2019), has edited the photography section of the publication Mister Warszawy. Architektura mieszkaniowa lat 60. XX wieku (published by Raster, 2012), and has co-authored the book Kurs na miasto (with Łukasz Gorczyca, published by Fundacja Architektury, 2012). Currently, she heads the Publishing Department at the NIAiU.

“27 Boxes. Photography of architecture in the work of Paweł Pierściński”

Paweł Pierściński was an enthusiast and propagator of the Polish landscape. His work draws on the tradition of patriotic and native photography and stems from the love of his small homeland – the Kielce region – which he documented persistently. Being best known for natural and agricultural landscapes, Pierściński was equally fond of urban and industrial scenery and was most appreciative of landscape borderlands. Although he did not devote much attention to architecture in his numerous writings on photography, Pierściński would often emphasise that he was most keen on landscapes and architectural monuments.

He usually mentioned his interest in architecture in the context of his education (he had graduated from the Civil Engineering Department of the Warsaw University of Technology) and his early photographic experience. The cathedral in Kielce was one of the earliest motifs captured by Pierściński on negative film, and Kielce’s historic buildings were featured at the first exhibition in which he participated (Provincial Photographic Exhibition in Kielce, 1955), earning him the first prize. After that success, the Kielce Branch of the Social Fund for the Rebuilding of the Capital commissioned from Pierściński a series of photographs documenting the monuments of the region. It was the beginning of him documenting changes in the Świętokrzyskie Province in the second half of the 20th century.

Paweł Pierściński’s Archive comprises 27 boxes the artist himself named ARCHITECTURE. Pierściński considered creating an archive of his own work an inseparable element of his artistic endeavours, to which he devoted himself from the 1950s, i.e. from the very beginning of his activity. The collection of photographs was inventoried alphabetically and chronologically – from Ameliówka to Żarnów and from 1955 to 1992. Each envelope with negatives or slides contains detailed information: month, year, place and a detailed description of the photographed object (e.g. IX•59•Sancygniów; Palace from the south). Pierściński’s archive is part of an ‘industry of memory’ – both about himself and about the Kielce region. The photographer provides us with hints on how to interpret the collection and how to find you way in it. Unfortunately, the archive has not been preserved in its entirety as some of it was destroyed by the artist himself, who – despite strenuous efforts – was unable to find an institution willing to take care of the sizeable collection. The surviving material has been dispersed among multiple institutions, including the Jednostka Foundation, which owns a large body of works.

Pierściński’s work is one that could be referred to as ‘total.’ The artist strives to present the natural and cultural assets of the Kielce region as broadly as possible. Therefore the depicted themes range from fields, mountains and forests, wooden architecture, palaces, churches and castle ruins to the modernisation of the then Polish People’s Republic – the development of towns and villages, construction of schools, kindergartens, blocks-of-flats, factories, as well as urban layouts seen from above. Pierściński would return to places over and over again to photograph them in compliance to his original working method. He photographed every building, feature or object from different angles to render their characteristics as fully as possible. As Pierściński himself recalled: “From the very start, I sought to fully exploit the qualities of the object, searching for the best vantage point and light conditions, such as to bring out the timeless features of architectural complexes.”[1] This is how he created series of photographs that study individual objects from several points of view. He often took close-ups, apparently seeking to preserve the physicality and texture of buildings. He inventoried any details – portals, window frames, stairs, brickwork, gutters, capitals, rosettes, vaults, inscriptions over portals, epitaphs, grates and ferrules. It is hard to resist the impression that these photographs were taken not only to create a complete picture of the region and promote it through publications, but also to preserve the tiniest detail in case it is necessary to reconstruct it.

And yet, when exploring the architectural portfolio of Pierściński’s archive, the viewer will often be puzzled. You often get the impression that architecture was only a pretext for artistic experimentation in landscape photography, and that the series of architectural photographs always led to the dissolution of the buildings in the landscape. In this way, Pierściński investigated how architecture coexisted with the surrounding landscape. This approach is also evidenced by the descriptions of photographs – VII•59•Sancygniów. Arian church from behind pines; VII•59•Sancygniów. Arian church from behind birches, VII•59•Sancygniów. View of the palace from the pond bank. Nature – trees, shrubs, sunlight, topography or animals – usually comes to the fore, while man’s work, namely architecture, merges with the landscape. Pierściński treated castle ruins, cottages, churches and modern buildings in a similar way. When photographing them, he adhered to the overarching principle he also applied to the other subgenres of landscape photography he committed to.

Pierściński investigated how a given architectural object is influenced by changing weather conditions and seasons. He was interested in how things evolve over time. He would return to a building to see how it changes year after year, capturing it on negative film in accordance with the pre-adopted rules. This is how Pierściński created his open-ended series, adding new studies as years passed. He observed landscape change over time and regularly supplemented the record for each town with further depictions of the same building or spot. He was also interested in deformations of perspective and how the optics influence the way landscape is seen, as is exemplified by a 1959 series of studies of the Rytwiany castle ruins. Pierściński shows the body of the castle from several perspectives. In the first picture, the ruin is seen at the far end of a pasture and is a compositional element of the scene balanced by a herd of grazing cows. The second shot shows the castle through the crown of a tree and highlights the relationship between two vertical elements of the composition – a tree bough and the ruin. Pierściński also takes a close-up to examine the relationship between the strongly accented ruin and the boulders scattered on the ground. The last one is a study of the castle ruin with thistles, with a thistle bush in the foreground, boulders right behind it, and a slightly blurred shape of the ruins even further in the distance. Pierściński analyses the relationships between the individual shapes and structures – the monumental ruin, the structure of the tree and the delicate form of the thistle, which is scaled up by the perspective effect employed. The same motif – the ruins of the Rytwiany castle – was photographed by Pierściński again in July 1972. This time he used a new method of work, presenting the photographed object from the same perspective, but from multiple vantage points.

Pierściński’s 1970s and 1980s works display a growing interest in geometric forms found in the landscape. As Pierściński wrote in the foreword to the album Struktury (Structures): “I found it satisfying to discover lines and geometric figures in this [Świętokrzyski] landscape. The farmland is divided by baulks into small plots whose shapes resemble the simplest geometric figures: triangle, square, rhombus, parallelogram, or irregular shapes reminiscent of organic forms.”[2] Pierściński’s Sandomierz photographs taken in the 1970s reveal the artist’s interest in the line and its influence on the perception of landscape, with architecture merely closing the horizon to disappear altogether behind the lush and constantly reviving nature.

Paweł Pierściński considered himself as a chronicler of the Kielce region. Like Jan Bułhak, he believed that documentation and creation were the essential, inextricably interlinked values of photography, and that his mission was to preserve and promote the Kielce region. Thanks to his persistent work and determination, as well as his deep conviction that his actions were right, Pierściński created a kind of atlas of the Świętokrzyskie Province. Being a founder of the Kielce School of Landscape, Pierściński made a name for himself in the history of Polish landscape photography, whose traditions date back to the time of the partitions. In addition, his way of seeing architecture as an inseparable element of landscape and emphasising the relationship between buildings and the natural surroundings has contributed significantly to the discussion about the role of architecture and fitting new buildings into the context of the place. 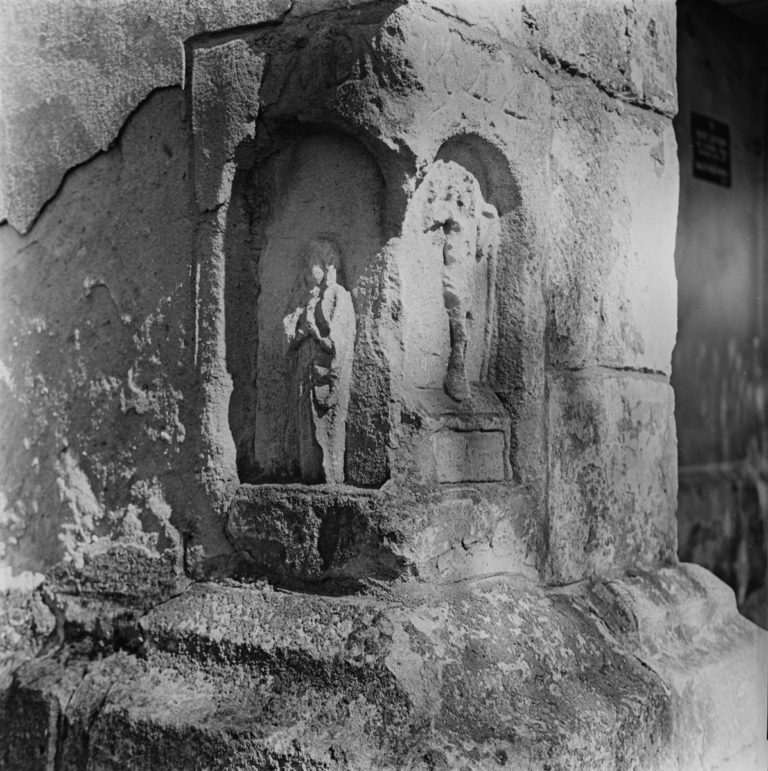 Figurine in the wall 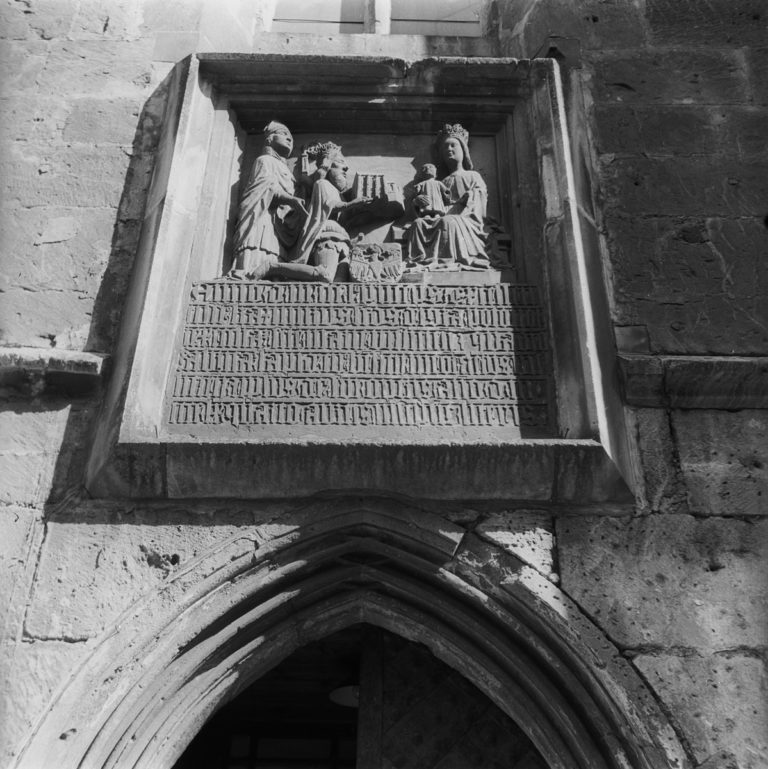 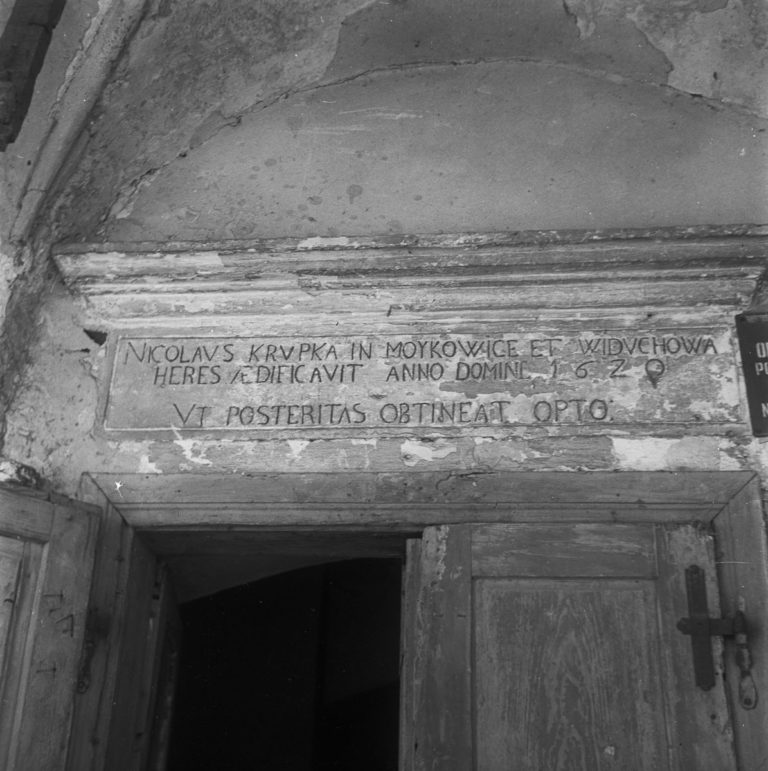 Inscription above the portal in the palace 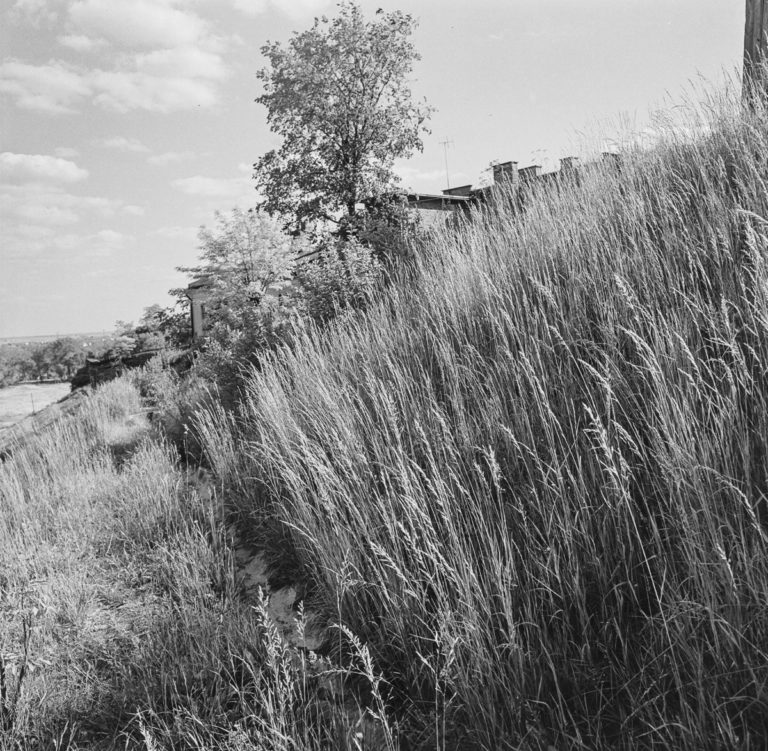 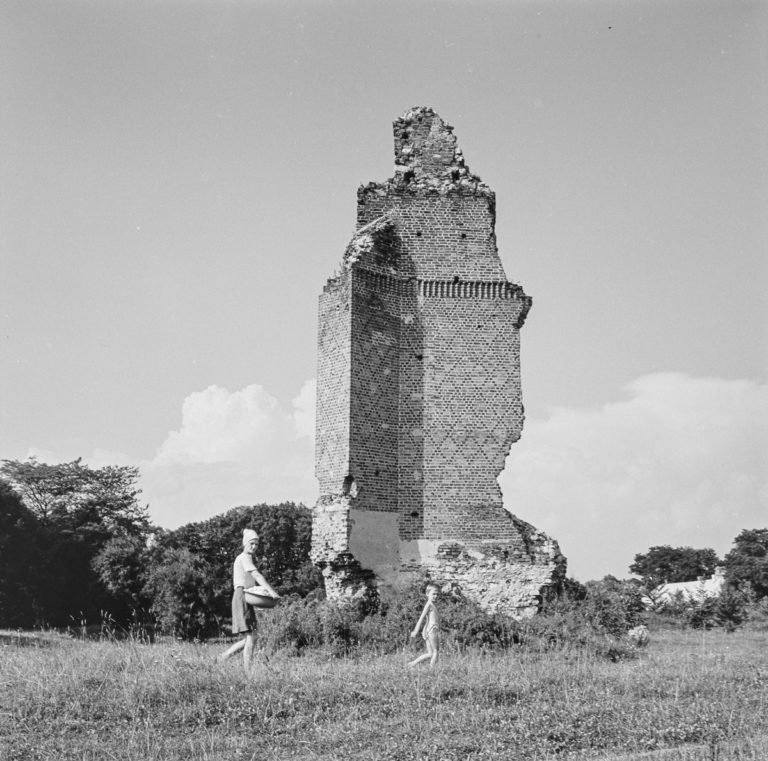 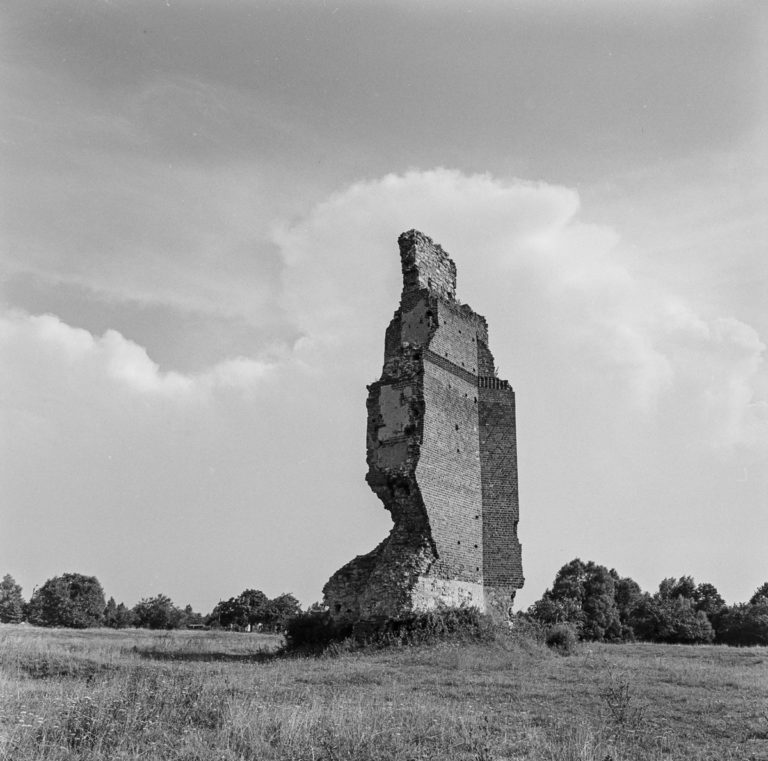 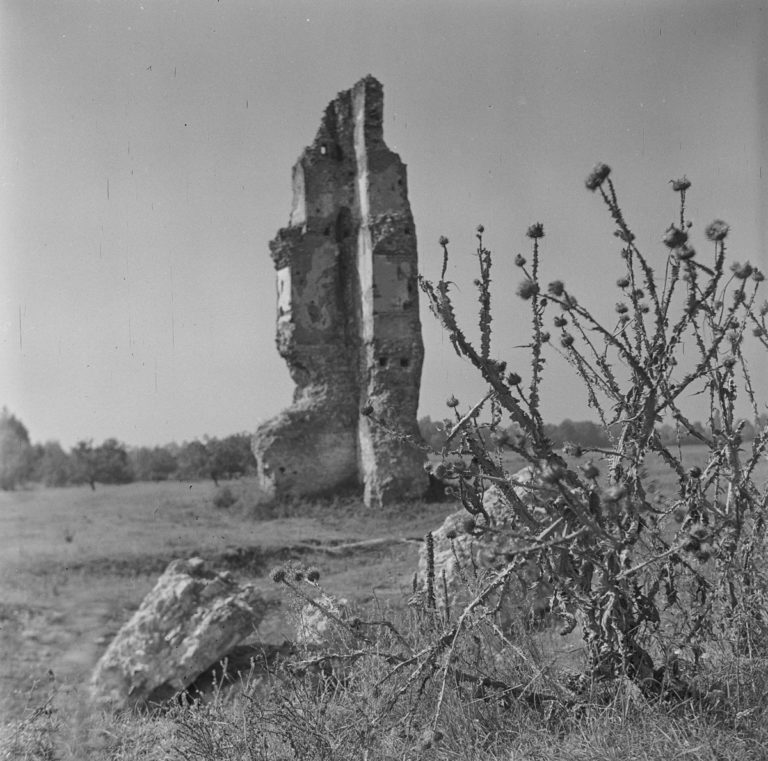 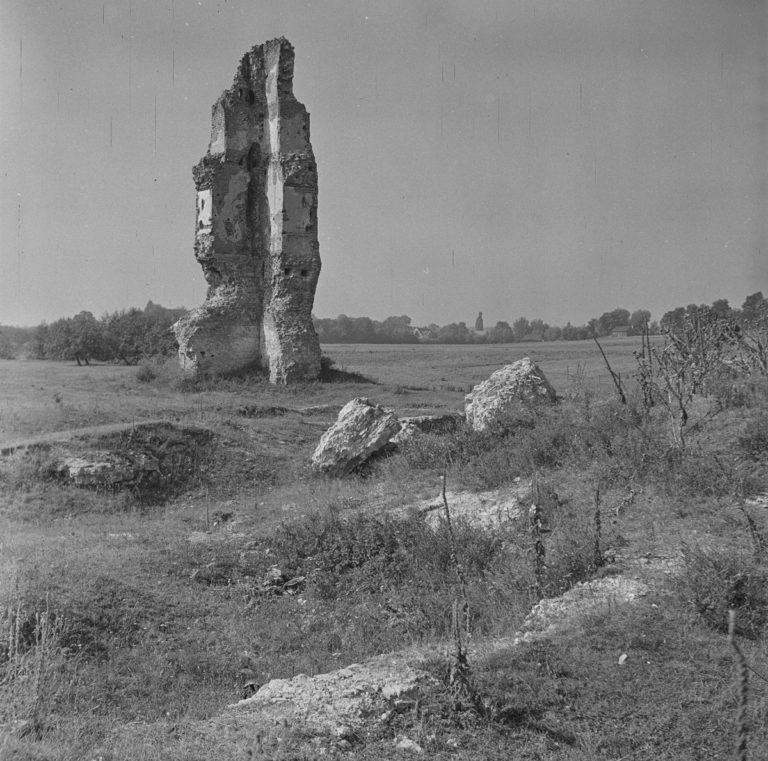 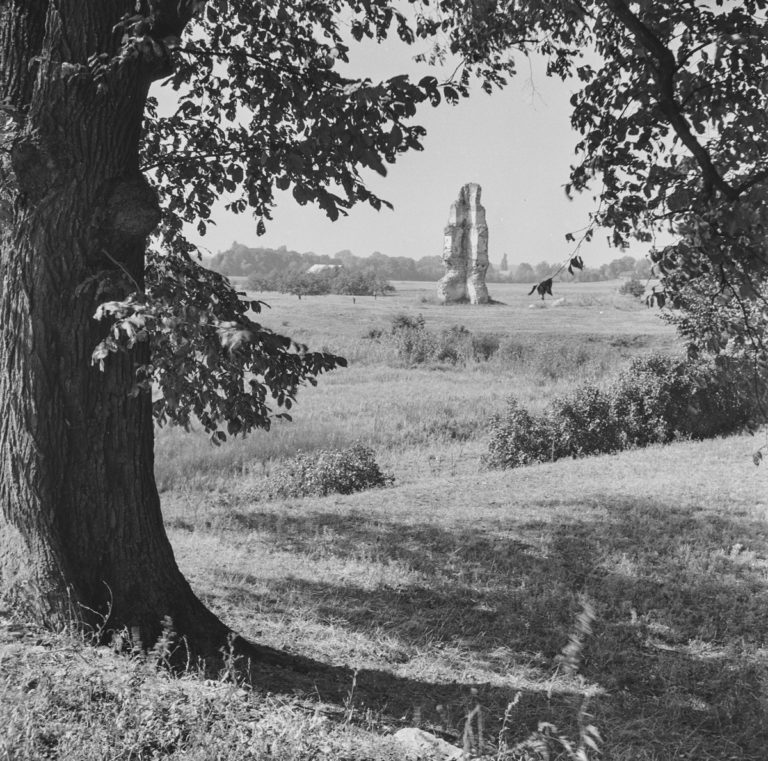 Castle from underneath the trees 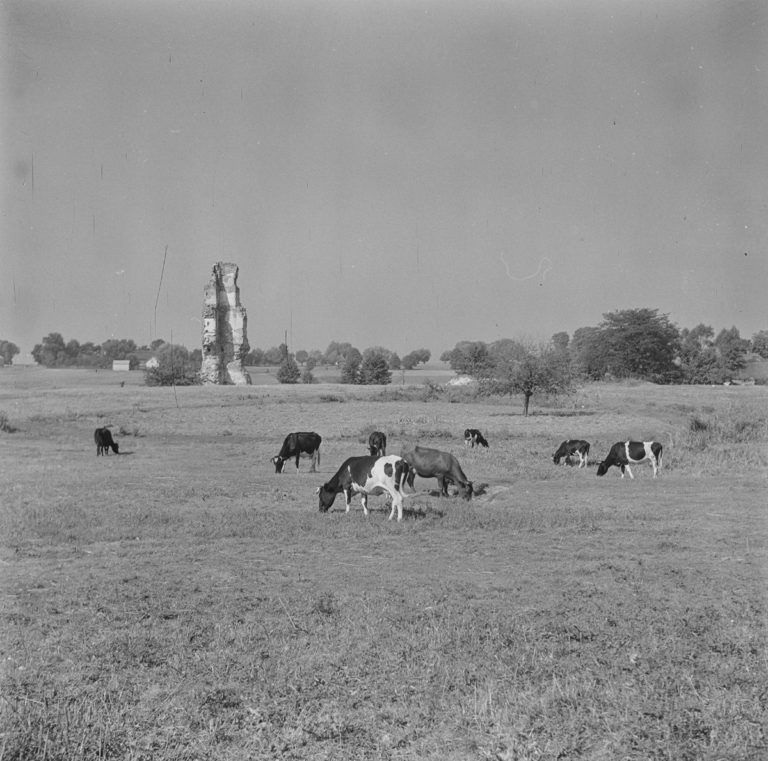 Castle from fields with cows 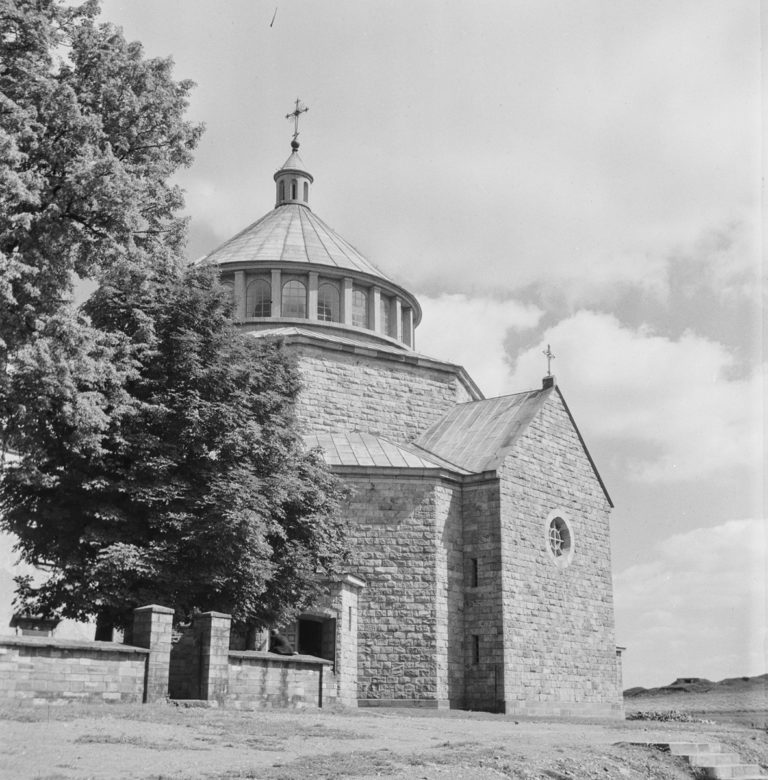 Church View from the south on the main part 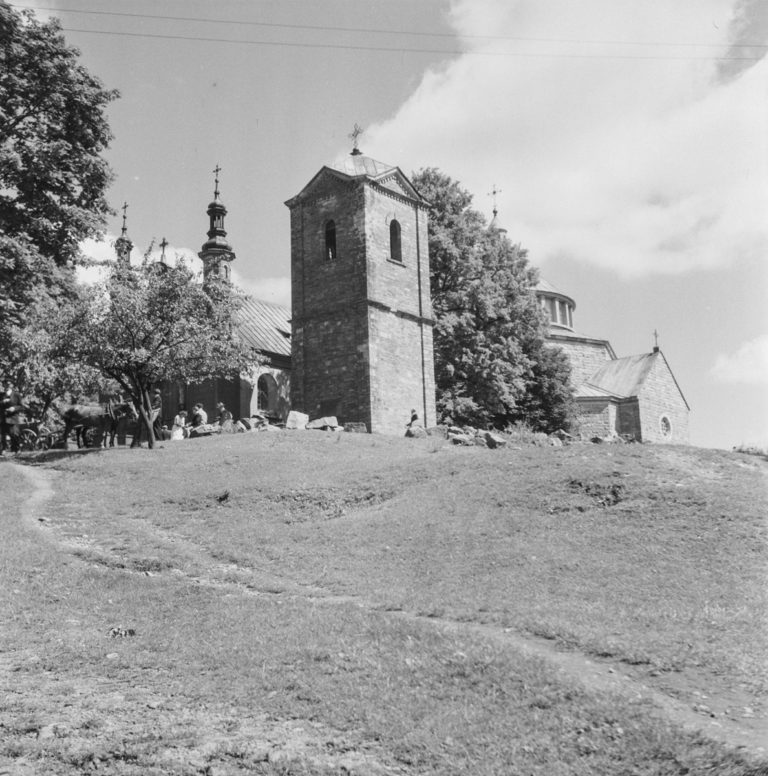 Church View from the south, belfry and nave 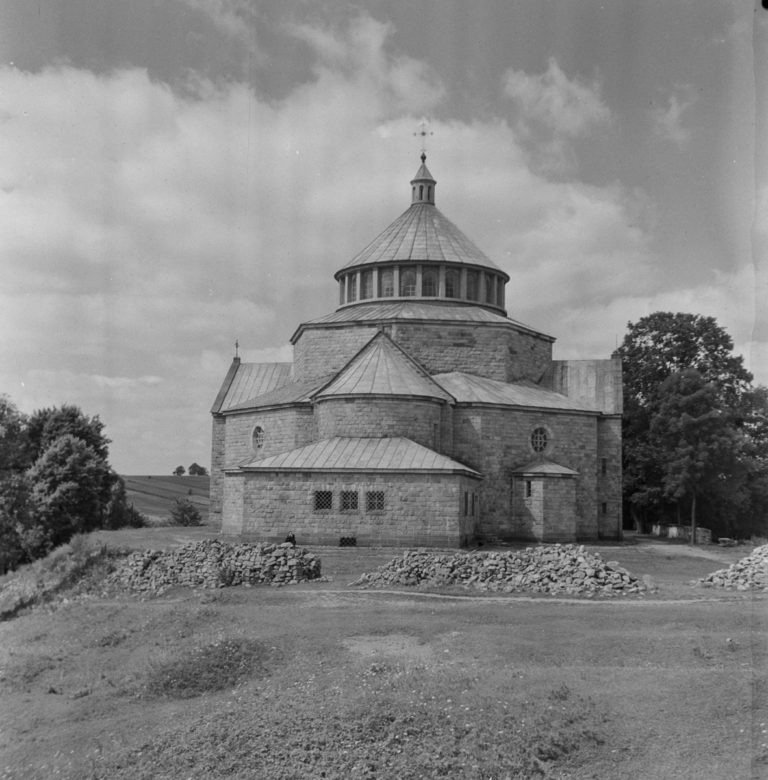 Church General view from the east 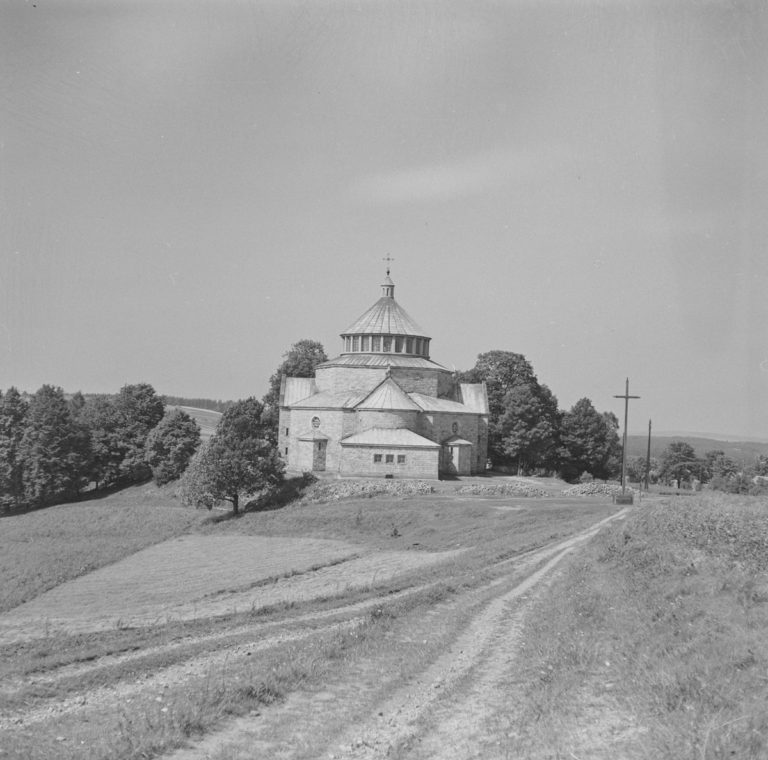 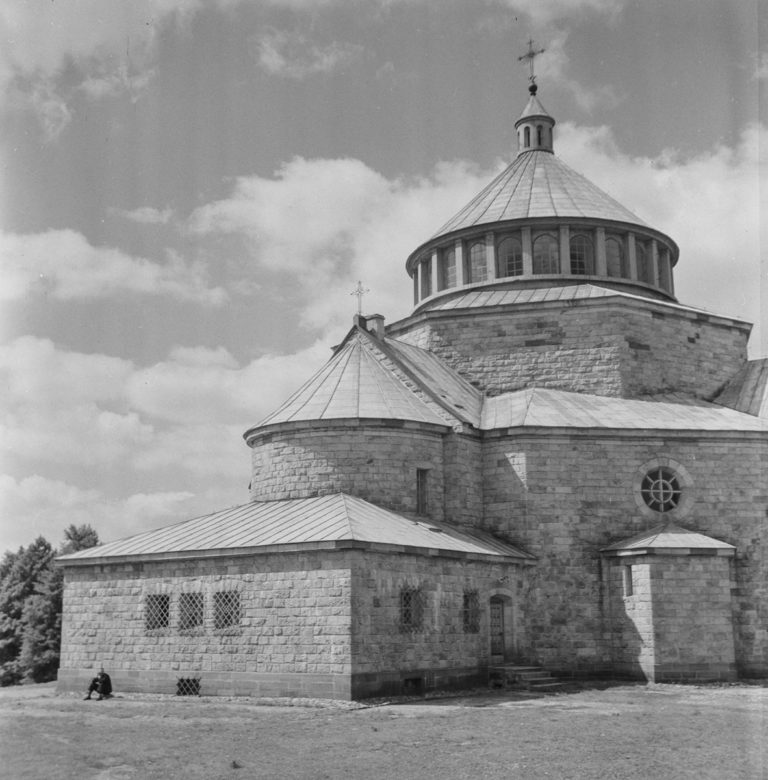 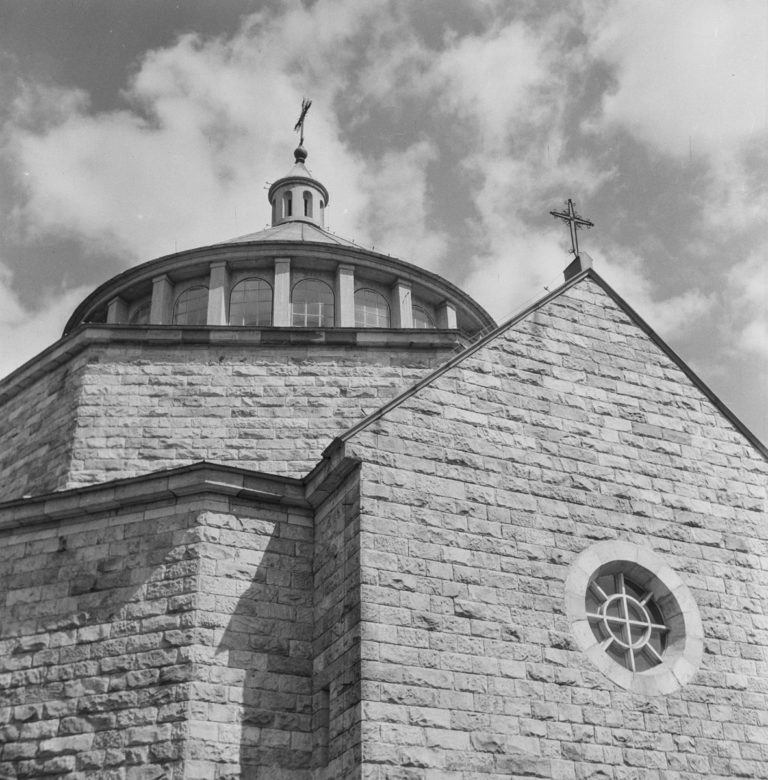 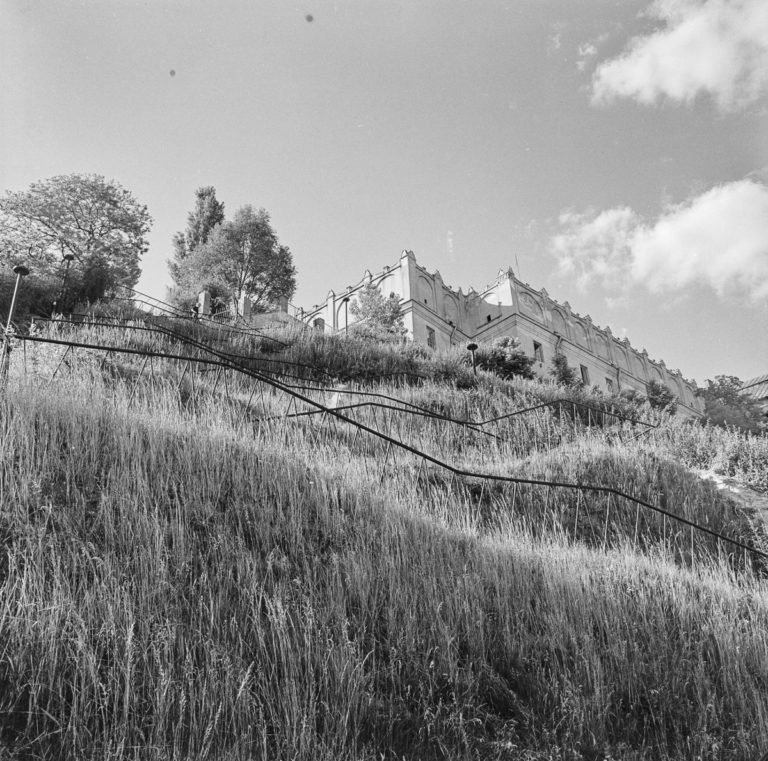 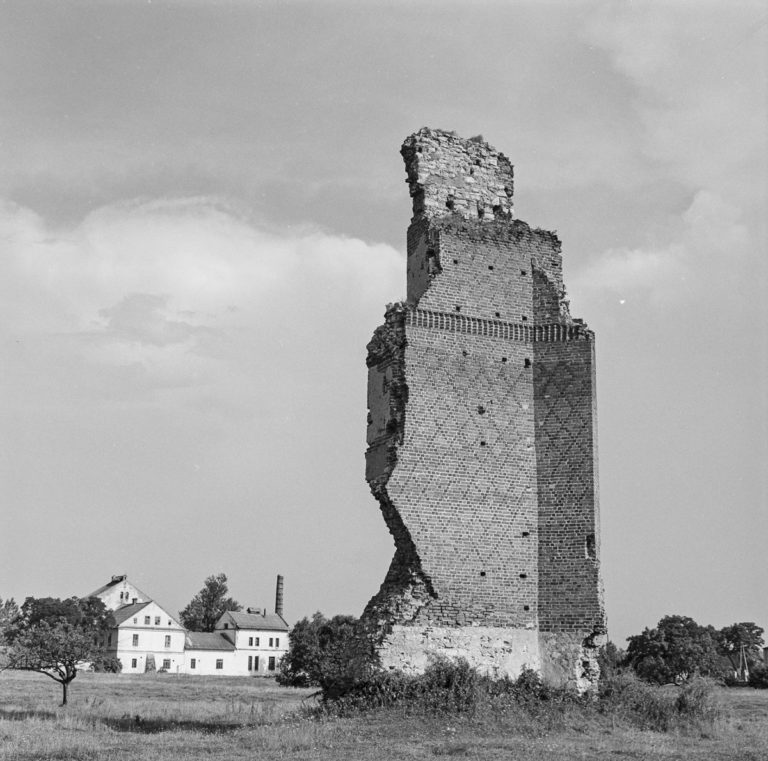